Discoveries of ancient Egyptian treasures have no end and never stop to impress the whole world.

In a press conference held on October 3, 2020, in Saqqara necropolis, Egypt’s Minister of Tourism and Antiquities, Dr. Khaled El Enany opened one of the Pharaonic coffins with the attendance of a group of ambassadors from more than 43 countries and 200 media representatives.

The Newly Uncovered Coffins in Saqqara

Dr. El Enany said that this Saqqara discovery marks the largest archaeological one in 2020.

The coffins had been buried for more than 2,600 years ago. However, all the coffins still preserve their original colors. Initial studies indicate that the coffins have been completely closed and haven’t been opened since they were buried.

In the beginning, archaeologists thought that there were only animal mummies, like cats, crocodiles, snakes, and lions. However, a remarkable number of coffins contain mummies. Archeologists have also found a group of 28 statuettes of Ptah-Soker, the main god of Saqqara Necropolis, a group of amulets, and an ushabti figurine.

There is still so much work to be done to identify the remains uncovered, but it was shown that the coffins date back to the 26th Dynasty of the Late Pharaonic Period, between 664-525 BCE. They belong to elite individuals of top officials and priests. 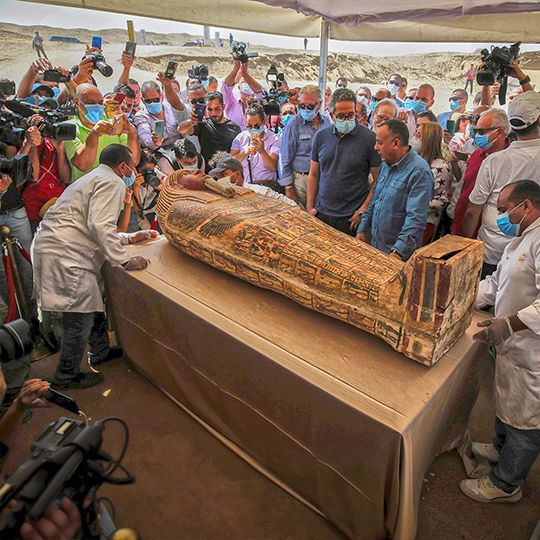 The newly uncovered coffins will be placed in the Grand Egyptian Museum to be displayed next to the hall that has the Asasif Cachette.

The series of the recent discoveries began on September 6, as Egypt’s Ministry of Tourism and Antiquities announced that more than 13 intact and sealed coffins were discovered in Saqqara.

The discovered coffins were found inside an 11-meter deep shaft, where three sealed niches were also found.

Later on September 18, archeologists found a group of 14 intact wooden coffins in a burial shaft next to the shaft that housed 13 coffins in Saqqara Necropolis.

Working on this promising region dates back to April 2018, the beginning of the discoveries.

It is when the Egyptian Ministry of Tourism & Antiquities announced via the internet, that a new archaeological discovery is coming in Saqqara Necropolis. It was on his Instagram official account that he uploaded a set of photos of him with excavation workers in Saqqara.

The first discovery was a burial well that led to a room with a large collection of statues, pottery, Ushabtis, and a sarcophagus.

This well was located right next to the Wah-Ti Tomb, which was discovered later in November 2019 in the sacred cemetery of animals.

The work began in this promising region in April 2018, and the work is still underway.

Ministry of Antiquities and Tourism Efforts

According to Egypt’s Minister of Antiquities and Tourism, the COVID-19 pandemic was not an obstacle for his colleagues to uncover more of previous civilizations in the Saqqara necropolis.

Called the City of the Dead, Saqqara was an ancient burial ground for more than 3000 years. It served as the necropolis for the ancient Egyptian capital, Memphis. The region is situated 32 kilometers south of the capital city of Cairo, and high above the Nile Valley’s cultivation area.

Saqqara is one of the world’s most important archaeological sites and was designated a UNESCO World Heritage site in the 1970s.

It was of historical importance throughout the Ancient Egyptian period. It served as the final resting place for deceased pharaohs and their families, administrators, generals, and sacred animals.

It is pretty well known for its 5,000-year-old Step pyramid of Djoser, which has recently undergone a $10 million restoration.

Saqqara houses at least 10 other pyramids other than Djoser, along with hundreds of tombs of ancient officials and other sites that range from the First Dynasty (2920 BCE to 2770 BCE) to the Coptic period (395 CE to 642 CE).

Old Kingdom pharaohs were buried within the 11 major pyramids of Saqqara whereas their subjects were buried in hundreds of smaller tombs.

Memphis City is significant as it is believed to have been founded by the Pharaoh Menes. It was also the capital of Ancient Egypt during the reign of the Old Kingdom.

Djoser Saqqara Complex or the Step Pyramid was designed for King Djoser (Dynasty 3) by his vizier Imhotep.

Located at Saqqara, the pyramid is the main necropolis of ancient Memphis. The multi-pleurae, a rearing cobra with a spread hood on the left in the foreground, play the role of divine protection of the king. The view is across the South Court.

The Step Pyramid is the first known monumental structure made of stone anywhere in the world.

As its name suggests, the Step Pyramid is a series of six levels of stone that decrease in size as they ascend to about 200 feet/60 meters in height.

The Step Pyramid was originally initiated as a mastaba(Arabic for “bench”). It may have been visualized as a series of mastaba shapes, decreasing in size, stacked one on top of another, creating an impressive geometrical form rising from the floor of the desert.

On the southeast of Djoser, The Jubilee Court is located. It was made to serve the spirit of the king in the afterlife.

Netflix will launch its new original documentary – about the unique tomb of the archaeological Egyptian site of Saqqara – with the title ‘Secrets of the Saqqara Tomb’ on its platforms starting 28th October.

The 113-minute documentary films a team of local archaeologists piecing together the secrets of Egypt’s most significant find in almost 50 years.

The burial ground of Saqqara will never stop amazing the whole world with its discoveries. It is a treasure that has no end.

Avenue of the Sphinxes

After days, the avenue of sphinxes will be inaugurated in Luxor on November 25. The event will emulate the ancient Opet festival, a processional celebration in which various images of gods were transported by this route between the temples of Karnak and Luxor.

Egypt receives thousands of visitors every year, but this summer things are going to be different for sure, with so many airports closed all over the world and with the world experience a pandemic, traveling will for sure change from now on. Humans are one of the most adaptable species that have lived on planet […]

The Top Attractions to Experience Egypt

Spectacular Egypt is a travel locale that’s been seizing globetrotter’s attention with its rich history for years. The Cradle of Civilization boasts of its intoxicating culture, sand-covered tombs of Great Pharaohs, and archaeological ruins. Moreover, with the gushing River Nile, golden-hued Sahara Desert and world-famous coral reefs, the mesmerizing land of Egypt houses diverse geographical […]